Back in November 2011, I was contacted by the folks at WeatherWary asking if I would review their new radar app. I said sure, but promptly got sidetracked. Better late than never, I wanted to complete my promise to them. Not only did I write a review but I also created a short video so you can better see the app.

WeatherWall Mobile is a radar app for the iPhone, iPad and iPod Touch. Being a weather nerd, I have a lot of radar apps on my iPhone. This one is on the first page of my weather apps folder and gets used a lot. For PC users, it reminds me of the GRLevel3 software. It downloads raw radar data and generates the radar image instead of other apps that download static weather map images. The result is a much higher resolution image that allows you to zoom in. The smoothing option is nice as it makes the radar a little easier to see. (it can be turned off)

Another nice feature is the ability to filter out various DBZ levels from the radar. During severe weather, I filter out the lower DBZ so the higher returns show up better. If you are looking for outflow boundaries or light snow, it’s best to turn off filtering. 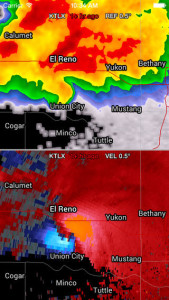 A lot of radar apps will show you the warning polygons, but WeatherWall Mobile allows you to tap a small dot on the warning and view the actual warning text. This contains various information like towns impacted, type of damage expected, hail size, wind speed, etc.

One of my favorite features which sets this apart from other radar apps is the ability to see two different radar products at the same time. (swipe in any direction with 2 fingers) I often use this to show both reflectivity and velocity images at the same time. Very powerful feature, especially in a mobile app.

If you are a weather enthusiast such as myself, then you need this app. Click the button below to go to the app store and purchase this app.